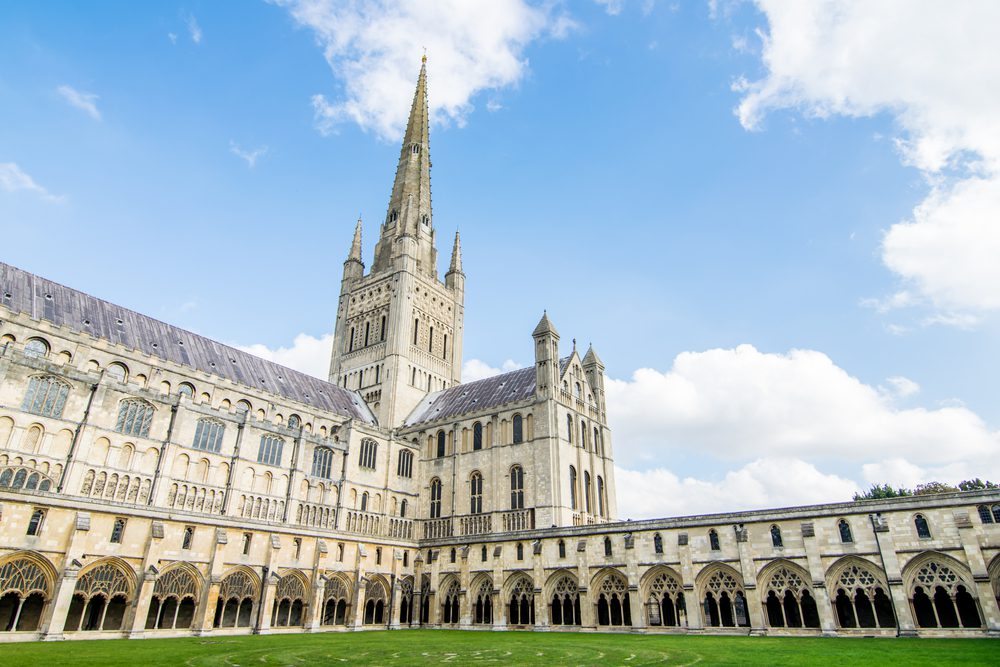 With over 90 miles of beautiful coastline, acres of countryside (including the Norfolk Broads National Park), as well as many cultural attractions, shops and other activities in Norwich and the various market towns, Norfolk is perfect for a short staycation.

But best of all, there’s plenty to see and do in the county that won’t cost you a single penny. So here are five summer attractions in Norfolk that are completely free of charge.

Norwich is home to one of the country’s most beautiful cathedrals. It is one of the best examples of Romanesque architecture in the UK.

Equally striking on both the inside and outside, the cathedral is free to enter. With free guided tours to help give you an even better insight into the building’s 900-year history.

We definitely recommend trying to join one of the free tours if you get chance. As you’ll learn about how the cathedral has survived riots, war, fire and the plague over the years. While the tours are free, donations are very much welcomed!

It’s also the most complete Norman cathedral in England and is also home to one of the largest cloisters in the country as well as one of the tallest spires too.

The area is also home to the country’s premier lavender farm, with over 100 acres of lavender under cultivation.

As well as being able to talk a walk through the spectacular fields themselves, you can also take a look around the lavender oil distillery. There oil is produced for Norfolk Lavender’s famous range of perfumes and toiletries.

There’s even an animal farm which is home to several rare and unusual farm animals. Along with a play area to keep younger visitors entertained and of course, a gift shop selling all manner of lavender gifts as well.

This sanctuary is the largest of its kind in the UK. It looks after all kinds of horses, ponies, mules and donkeys, with two visitor centres in Norfolk that are both free to visit.

A popular day out for both young and old animal lovers, Redwings gives you a chance to get up close and personal with the animals. You can learn more about their stories and the work that the centres do in rescuing and caring for horses.

There are also walking tours, a café and play area at the visitor centres too.

The remains of one of the largest and most important monasteries in the country are located in the market town of Thetford. They are totally free to take a look around.

Despite being built over 800 years ago, much of the original building is still intact. Including the lower walls of the church and cloister and the 14th-century gatehouse.

The priory was one of the most important in East Anglia in its day and was the burial site of the Earls and Dukes of Norfolk. Due to its significance, was one of the very last monasteries to be closed during Henry VIII’s Dissolution of the Monasteries in 1540.

And if you happen to believe in the supernatural, the priory is also believed to be haunted and even featured in an episode of the TV show Ghosthunters.

The reserve itself comprises a number of different habitats, including grazing marsh, woodland, salt marsh and sand dunes across about 3,706 hectares of land.

Species that you can expect to spot as you take a walk through the reserve include pink-footed geese, Eurasian wigeon, brant geese and waders, as well as one of only two antlion colonies in the UK.

So, next time you visit us at one of our Norfolk parks here at Pure Leisure and are looking for a family day out that won’t break the bank, bear these summer attractions in Norfolk in mind!